The transition from Roman to Hindu-Arabic numerals 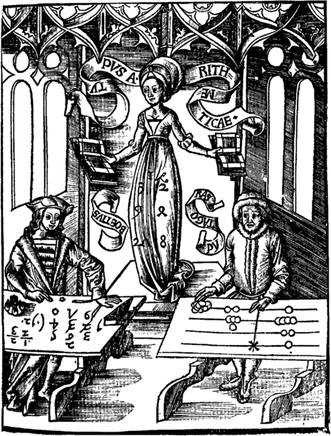 Introduction
In de Middle Ages the Hindu-Arabic numerals were not used as straightforwardly as we do today. Although they were described by the Arab mathematician Al-Khwarizmi in the 9th century, it wasn't until the 12th century that translations of his work begin to appear in Europe. However, even these translations did not lead to a fast transition. It wasn't until the 16th century that the Hindu-Arabic numerals completely replaced the Roman numerals.

One may wonder why it took a number system that seems so much easier to use so long to replace the cumbersome Roman numerals. This question only began to be researched quite recently, as more distant publications noticed this trend, but did not try to explain it. However, the works that address this question often focus on the economic side of the transition. My research will thus be centred on the introduction and spread of the Hindu-Arabic numerals in academic circles.

Theoretical background
To clarify the not unproblematic term 'academic circles' it is necessary to sketch the theoretical background. First of all, it can be seen that the view of Medieval society as a set of unconnected, independent unities needs to be reconsidered. There are several connections to be found. Especially courts who have access to unique intellectual resources contributed to the spread of new ideas, since only the richest courts could finance scholars permanently. The result of this was that scholars travelled from court to court, bringing with them their previously gained knowledge. A further connection is the circulation of books that were copied at monasteries. These books could constitute textual networks by which  knowledge was spread.

A second subtopic that needs to be considered is the position of mathematics in the Middle Ages. Economic applications are often presented as one of the main sources of the origin of arithmetic. However, they are not the sole reason for its existence, since governments have their share too. For a part the goverment can be seen as an upscaled merchant, thereby returning to economic applications, but their larger amount of resources and responsibilities, along with the previously mentioned access to scholars, stimulated rationality in general and a mathematical mentality in particular. Furthermore, architecture, construction of roads and canals and the development of other technology contributed to the research on mathematics that went beyond mercantile arithmetic.

The previous discussion already gives an idea how we should see academic circles in the Middle Ages. Obviously early universities are included in this term, as well as specialist mathematicians, which are often financed by courts. The most important criterium is that of applicability of their treatises: where mercantile arithmetic is applicable to commerce, so called 'pure' mathematics is either applicable to architecture etc. or not directly applicable at all.

The second phase (12th to early 14th century) saw two distinct changes. In the 12th century translations of Arab treatises on algorism appeared in Europe. Some of these translations reckon with Roman numerals, others with Hindu-Arabic numerals. Combined with the variation of number forms, we can conclude that reckoning with the new numerals wasn't yet widespread. The early 13th century saw the appearance of some very influential treatises on algorism, in particular the Carmen de Algorismo by Alexander de Villa Dei and the Algorismus Vulgaris by Sacrobosco. The Liber Abaci of Leonardo Pisano, also known as Fibonacci, is sometimes included in this list, although his influence remains doubtful. These treatises show a greater acquaintance with the new number system than the translations from the 12th century.

The third phase (14th to 16th century) concludes the introduction and spread of the Hindu-Arabic numerals in Europe. The works of Alexander de Villa Dei and Sacrobosco are soon included as standard textbooks in the school curriculum. This accelerates the spread of this number system, as suddenly a large audience is reached, till in the 16th century this numerals have acquired the status they still have today.